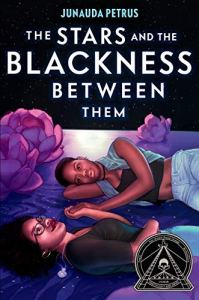 Synopsis: Trinidad. Sixteen-year-old Audre is despondent, having just found out she’s going to be sent to live in America with her father because her strictly religious mother caught her with her secret girlfriend, the pastor’s daughter. Audre’s grandmother Queenie (a former dancer who drives a white convertible Cadillac and who has a few secrets of her own) tries to reassure her granddaughter that she won’t lose her roots, not even in some place called Minneapolis. “America have dey spirits too, believe me,” she tells Audre.

Minneapolis. Sixteen-year-old Mabel is lying on her bed, staring at the ceiling and trying to figure out why she feels the way she feels–about her ex Terrell, about her girl Jada and that moment they had in the woods, and about the vague feeling of illness that’s plagued her all summer. Mabel’s reverie is cut short when her father announces that his best friend and his just-arrived-from-Trinidad daughter are coming for dinner.

Mabel quickly falls hard for Audre and is determined to take care of her as she tries to navigate an American high school. But their romance takes a turn when test results reveal exactly why Mabel has been feeling low-key sick all summer and suddenly it’s Audre who is caring for Mabel as she faces a deeply uncertain future.

Junauda Petrus’s debut brilliantly captures the distinctly lush and lyrical voices of Mabel and Audre as they conjure a love that is stronger than hatred, prison, and death and as vast as the blackness between the stars. (via Goodreads)

It’s hard finding the motivation to do ANYTHING. The pandemic is starting to weigh heavy on my heart and all I want to do is sleep or watch random videos on YouTube. But then I began reading The Stars and the Blackness Between Them and it was genuinely the best antidote for this emotionally draining time. This is story that is heartwarming and joyous. There are moments of pain and sorrow, but the author’s love for these characters and their stories is so expertly woven into the narrative, that I knew it would have a beautiful ending.

The romance in here is nothing short of amazing and endearing! I’m hesitant to describe it as ‘natural’ because queer romances are often held to a much higher standard than their straight counterparts. But the love and romance between Audre and Mabel has a natural, slow progress that brought a smile to my face countless time. It was refreshing to read a queer romance between two Black girls where their Blackness and queerness was uplifted and reaffirmed. I think Mabel had some of the best romantic lines. She’s in awe of Audre and the tiny details that make her unique.

Against all this green, Audre is cocoa wrapped in a light-purple dress with skinny straps that keep sliding down her shoulders, her booty a pillow on the earth in the midst of it all. She also has these super thick glasses with brown rims that has to be circa 1988 but still made her seem like she saw into your should. And was unimpressed.

“Mm-mmm…I ain’t eat these in so long.” Audre is now on her knees, leaning into the patch of raspberries (low-key greedy but high-key cute), picking them, and placing one on each of her fingertips. Once a berry crowned every single tip, she methodically ate each one off a digit. It’s the most tedious way to eat raspberries, and yet I’m mesmerized.

The book is filled with little moments like these where one of the girls would hyper focus on some attribute of the other and it’s written with such beautifully, descriptive language.

Speaking of language and writing, this is one of the best written stories I’ve read this year. It feels effortless and yet it’s clear Junauda Petrus worked hard crafting this story and these sentences and sections. Reading this feels like being embraced by a trusted and dear friend! It feels like returning to a safe space that I haven’t visited in years. I love the way she describes the environment, the character’s emotions, the different relationships. This is one of my favorite sections that comes about halfway through the story:

“Who ancestor needs sweetness and love inside of you? In your skin, in your beautiful darkness?” she asked over me, breaking smoke over me and under the moon. I closed my eyes ’cause I feeling so alive with she words, she very voices is holding me. Then I felt a strange feeling between me and Queen. Like the air was too easy to breathe, like I was floating, and like I was getting warm from within. I opened my eyes, and Queen was dancing up high over the dasheen bushes and me, in a rapture of she own. I looked at my own body and I saw it glimmer, glowing like I was made of light. I believed my eyes and I believed my heart, because I was seeing what I have always felt:

That Queen is God.

I started shaking, the feeling was so strong between me and Queen. I felt as if I were up there with her. And I was, floating feet above the ground. I felt myself in my grandma’s body and she in mine. I closed my eyes and fell backwards into myself.

I’m usually hesitant to read dual perspective narratives because too often the voices feel too similar. But again, Petrus works hard to keep Mabel and Audre’s voices separate and distinct. While they both speak with the diction and cadence typical of teenagers, Audre’s Trinidad background and Mabel’s Minneapolis upbringing comes into play when they speak. Audre in particular uses dialogue and idioms that are native to her country, making it easy to distinguish who is speaking in a given conversation or chapter.

There are speculative and magical elements in the story, but it begins on a small scale before culminating in an ending that is highly symbolic and metaphorical. The ending scene and the description and figurative language is beautiful. And again, Mabel and Audre have distinct spiritual/magical encounters that are unique to them. Mabel has her symbolic dreams, while Audre feels a connection to an ethereal Goddess and uses the lessons and magic that her grandmother taught her. It never feels like it breaks the narrative or slows the pacing down. There’s never a moment where Petrus pauses the story to explain what’s happening or how the magic works. It’s just a part of these character’s experiences. They never question it and as I reader I never questioned it either.

This is a perfect book and a great debut. As I write this review, I genuinely can’t find a single fault with it. I love the characters, the atmosphere, the intense emotions that run through this narrative. It’s a story that I want to read over and over and over. It’s a story that can be read by young adults and adults. This is a book that deserves any and all praise that it receives! If you’re in an emotional or mental slump, I recommend picking up The Stars and the Blackness Between Them and giving it a read.